Our team studies the molecular, cellular and evolutionary bases of bacterial predation using  Myxococcus xanthus as a model organism. M. xanthus is a ubiquitous soil bacterium that forms coordinated cell groups to invade prey communities by motility and consume them to grow and form multicellular fruiting bodies that host sporulation when the nutrients are exhausted. This is a powerful model system to study how single cell behaviors are regulated spatially and temporally to elicit complex emergent group behaviors, to detect, kill and form multicellular assemblies. To tackle these problems, we take an integrated approach using molecular and single cell systems and linking them to community scales by global computational and theoretical approaches. This research relies on a large collaborative network involving molecular, cellular and structural biologists, biophysicists, mathematicians and bioinformaticians. Specifically, we have developed a unique image analysis framework to observe molecular processes in single cells and map them spatially to the multicellular community.

In the longer term, we hope to bridge these studies to field studies in an attempt to describe how molecular mechanisms defined in the laboratory relate to biological processes that these predators experience in their true ecological niche, where they likely interact with other bacterial species, fungi, nematodes and also perhaps plants.

Beyond the fundamental aspects of this research, there are numerous potential applications, for health (via the discovery of new antimicrobials) but also possibly for agronomy and current environmental issues, at a time where biodiversity is critically endangered by human activity and global warming. 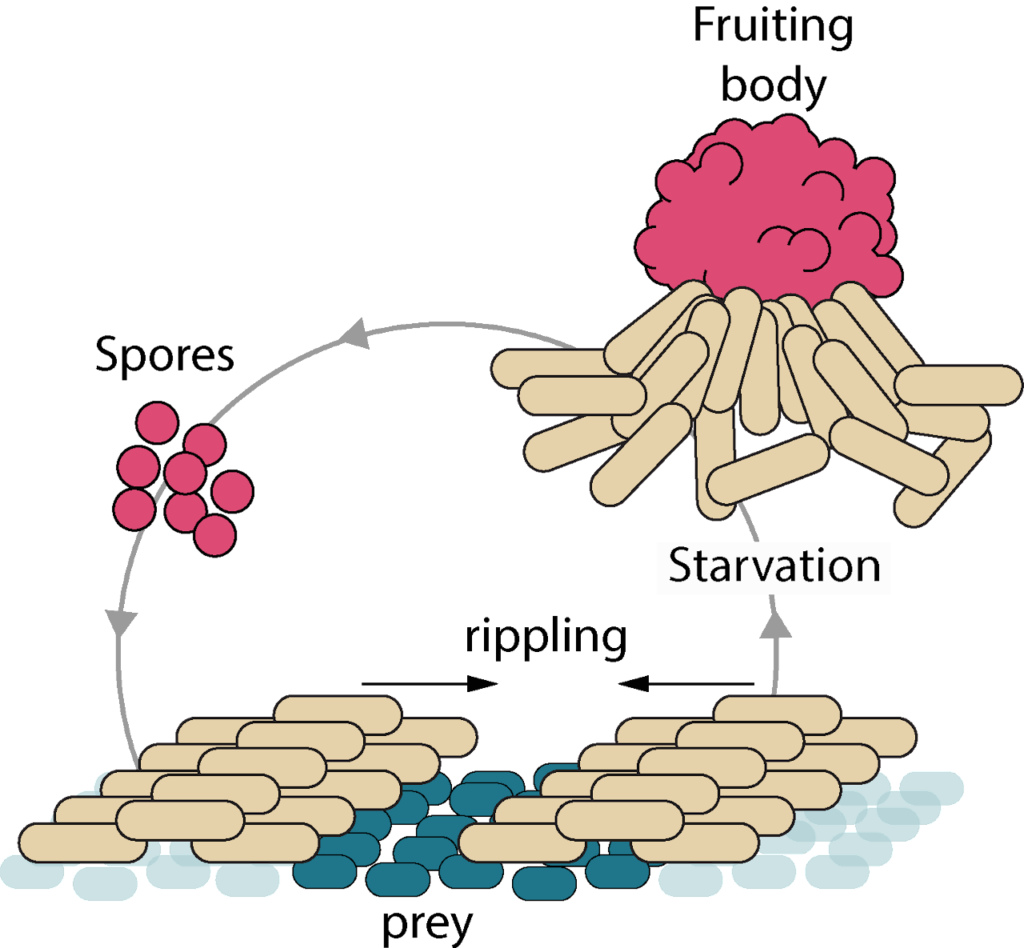 Physical, mathematical and computational modelization of two molecular machines In collaboration with the CENTURI (THE TURING CENTRE FOR LIVINGSYSTEMS), the LCB is offering a new

Portrait of Emilia Mauriello (in French), researcher at LCB and winner of the Bronze medal of the CNRS 2020. A portrait produced by Gianluca Sferlazzo

LCB, in collaboration with idylle have developed Chitozen : The 1st functionalized microscope coverslip to image live bacterial cells & study their growth and behavior

November 2021, LCB released MiSiC software, the first tool capable of automatically analyzing images of bacterial biofilms that can be found in our mouths, in

Congratulations to Emilia! We are very proud to share with you that our collaborator Emilia Mauriello, Research Director, received a CNRS bronze medal. She joined

Sensing, matrix and cell interactions with the prey

Evolution and ecology of predation

How are Myxococcus cells growing on prey? How do Myxococcus cells uptake nutrients from preys and how is the cell cycle coupled to prey killing and motility? We have designed tools to directly image all the cell cycle stages when Myxococcus is in contact with the prey cells and thus observe cell growth directly at the single cell levelinside the prey fields. This methodology also allows the direct observation of subcellular processes, such as assembly of the cytokinetic ring, chromosome replication and segregation. We also monitor global gene expression changes at various stages of the predation cycle, informing on the metabolic pathways that become activated during predation. We are now developing genetic screens to identify regulatory checkpoints that couple metabolism to the cell cycle upon prey nutrition.

How do Myxococcus cells move? How do they make directional decisions and how do coordinated cell groups move and form patterns? Myxococcus cells move in groups (S motility) or in isolation (A motility) by two independent motility complexes: a Type-IV pilus operates Smotility, while the recently discovered Agl-Glt complex drives A motility. We study how both systems act together to promote prey invasion. In particular, both motility systems operate under a common regulatory network, whereby a single regulator, the Ras-like GTPase MglA activates each system at the bacterial cell pole. We study how this protein activates each of the motility systems and how it discriminates them depending on the cellular context.

Last, MglA can be switched to the opposite pole by the activity of a chemosensory-like system (Frz). Consequently, the cells change direction and move in the opposite direction (reversal). We study how activation of the Frz receptor triggers a phosphorylation cascade that switches the Mgl system and we use a combination of high-throughput tracking and modeling to connect these regulations to multicellular behaviors, especially during prey invasion and the formation of rippling waves.

The M. xanthus community secretes a complex extracellular matrix that organizes multicellular movements and facilitates swarm expansion. At least two major exopolysaccharides (EPS and BPS) are secreted and both are essential for group movements, promoting Type-IV pilus motility and exerting a surfactant action to counteract surface tension. We study the function of this complex matrix as well as its structure during the predation cycle. The extracellular matrix is also coupled to motility by signaling networks in the form of a positive feedback loop that both enhances Type-IV pilus activity and EPS synthesis. We are studying how these systems interact at the molecular level.

Prey killing was long thought to involve the extracellular secretion of lytic enzymes and molecules by the predator. In fact, we recently discovered that killing depends mostly on predator-prey contacts involving a newly discovered pilus-like system (Tad) that becomes assembled specifically when Myxococcus cells establish contact with prey cells. We are currently studying how this system promotes killing in coordination with motility. 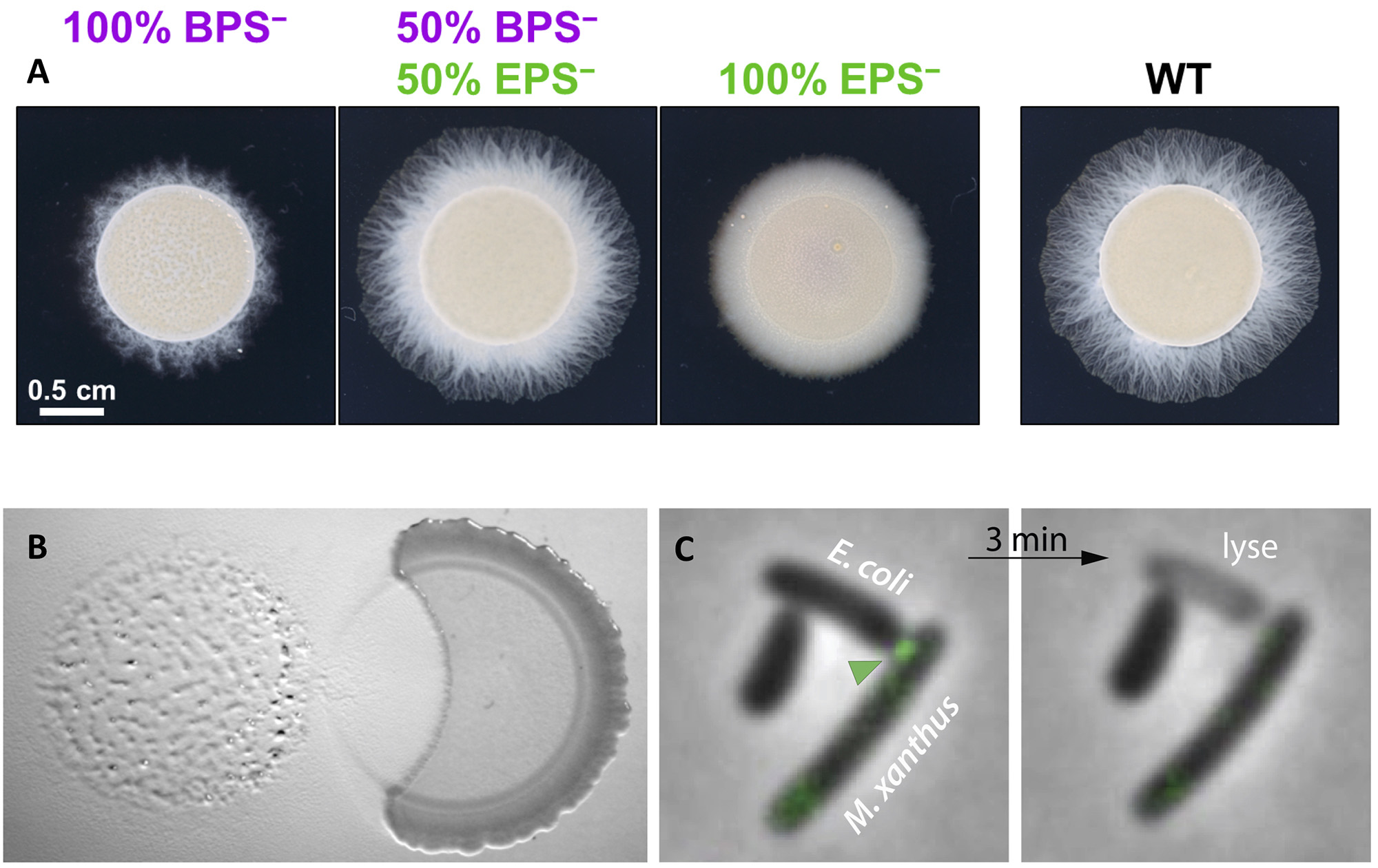 How does predation evolve in the soil? And what exact interactions does Myxococcus experience in its true ecological niche? We are now expanding our laboratory studies to field work and test how the mechanisms that we uncover in controlled laboratory conditions are used in the soils. For that, we are adopting a series of distinct approaches combining experimental evolution in the laboratory, omics approaches wild strains and, more recently, environmental sampling of Myxococcus interactions by metagenomics analyses of soil samples. Doing so, we hope to determine the ecological function of these bacteria and how they balance the composition of soil ecosystems. These studies could have direct applications for the restoration of biodiversity-deprived soils and understanding of plant-associated microbiota in the rhizosphere.