DIFFERENTIATION, EVOLUTION AND ADAPTATION OF CYANOBACTERIA

Our group studies cellular differentiation and pattern formation in cyanobacteria using the filamentous multicellular cyanobacterium Anabaena PCC 7120 as a model. When combined nitrogen becomes limiting, nitrogen-fixing cells called heterocysts differentiate from vegetative cells at semi-regular intervals along the filaments (every 10 to 15 vegetative cells). This one-dimensional pattern emerges following Turing-model rules. We have elucidated a key aspect of patterning of cyanobacterial heterocysts by uncovering the immunity mechanism that protects the developing cell from self-inhibition. Using genetics, cellular biology, and genomics, we aim to address major developmental questions of differentiation in Anabaena : How are the inhibitory morphogens processed and transferred along the filaments? What are the signaling networks that maintain the pattern? How does the circadian clock impact the development? What is the evolutionary history of the developmental genes across the cyanobacterial phylum?
We are also interested in engineering Anabaena in order to conciliate the oxygen-sensitive hydrogen production with photosynthesis. Since, Sunlight, CO2 and water are the only prerequisite to cyanobacteria growth, these organisms are candidate of choice for the production of biofuel. 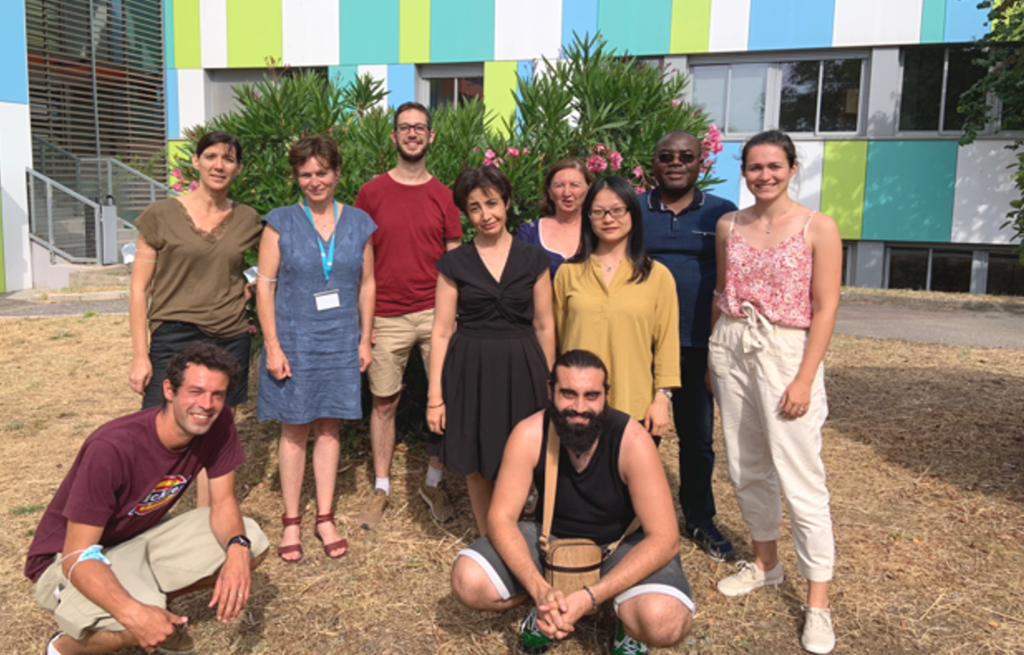 The thesis project is part of our study of cell differentiation in a multicellular cyanobacterium (Anabaena). This prokaryote is a perfect model to address questions

From the perception of N2 to heterocyst development in Anabaena

The Anabaena internal clock to adapt to its environment

The ecology of diazotrophy and its link to hydrogen metabolism

Under combined nitrogen starvation, Anabaena perceives the presence of N2 and launches in response a developmental program leading to heterocysts: microoxic cells devoted to atmospheric nitrogen fixation. Heterocysts are formed at a semi-regular pattern that follows the Turing-model rules: in the developing cell, a transcriptional regulator (HetR) activates a specific transcriptional program that includes the expression of its own inhibitors. The diffusion of these inhibitory morphogens along the filament ensures pattern establishment. This initiation step is followed by a morphological differentiation which leads to the mature heterocyst and only at this point the nitrogenase encoding genes are expressed and N2 is fixed. We study the molecular mechanisms that allow the developing cell to sense the signal and to express the genes specific to each step of the process. How the transcriptional regulators involved act to orchestrate this temporal and cell specific transcription program? What are the sigma factors involved and how is their action regulated? How are the morphogens maturated and how do they diffuse along the filament? What is the distribution and evolution of the heterocyst-specific genes across the cyanobacterial phylum? Those are the main questions we aim to answer by combining genetics, biochemistry and genomics approaches. 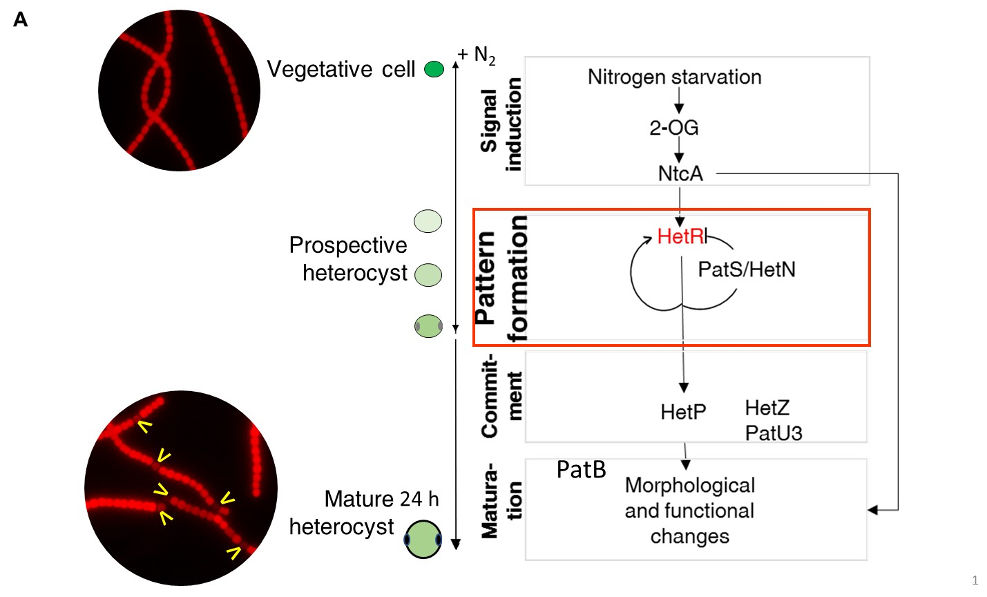 Circadian rhythms are essential processes with broad implication on the physiology and adaptation of almost all living cell. Endogenous circadian clocks are critical to control temporal programs of cellular physiology to anticipate and adapt daily environmental changes like intensity light or temperature created by earth rotation. Although the molecular core clock functioning in a cell begins to be well understood in several organism, several key questions remain to be addressed. How do the circadian clock present in every cell of an organism are synchronized? How the same circadian clock function in different cell type with different transcriptional program? Robust and precise intracellular circadian timing has been described in cyanobacteria with positive impact on their fitness in rhythmic environment, and more particularly in a unicellular cyanobacterium. Our aim is to extend the study of the regulation of circadian rhythms to a multicellular bacterium, the cyanobacterium Anabaena. This filamentous bacterium constitutes a unique model to investigate, at the single cell level, the integration of the circadian rhythm into the differentiation cycle of a multicellular organism. By combining genetics, cell biology and modern age genome wide approaches, we are analyzing the molecular actors involved in timekeeping with an emphasis on the functioning of the clock in the heterocyst cell. Thus, addressing these questions in a relatively simple organism will help to understand the biological clock in a more complex tissue/organism. 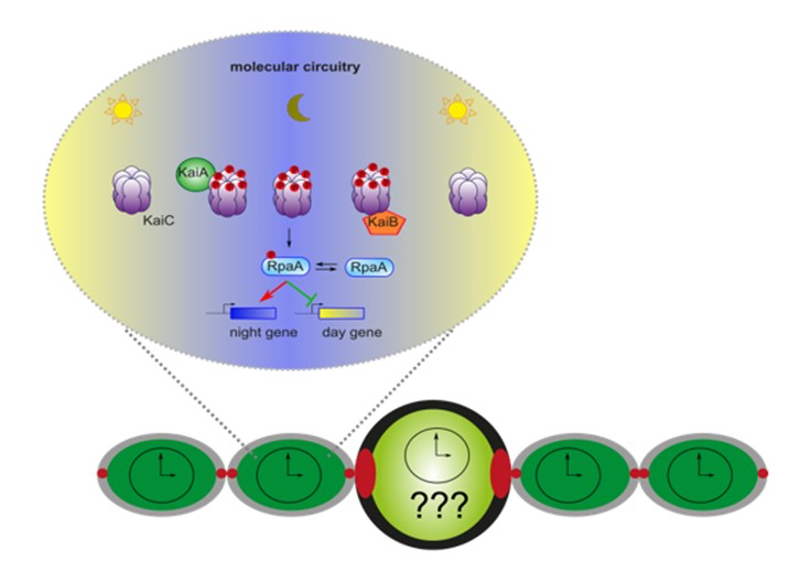 Nitrogen fixation is the only biological entryway of new nitrogen into the open ocean and therefore constitutes a main driver of oceanic primary production. As a result, not only the present diazotrophic activity but also its possible changes in response to a future, warmer climate, as well as their impact on the ocean biogeochemistry are key parameters to determine for a correct estimation of the energy fluxes related to diazotrophic growth. To improve our knowledge of the actual representation of diazotrophs, we are scrutinizing the growth efficiency of the marine cyanobacterium Crocosphaera watsonii in regard to phosphorus and temperature changes by running tightly controlled and closely monitored culture experiments. To accurately evaluate the responses, at a molecular level, to rapid and transient changes in growth parameters, the transcriptional response of key genes involved in nitrogen fixation and response to nutrient starvation is evaluated.

Since nitrogen fixation produces hydrogen as a byproduct, diazotrophic cyanobacteria are considered as interesting candidates for Bio-H2 production. In addition, several strains produce hydrogenases that can also be used for H2-production. However, Oxygen sensitivity of nitrogenases and hydrogenases is a significant limit to the use of cyanobacteria as cell factories for H2-prodcution. We have shown that the heterocysts of Anabaena can be used a production-unit for O2-senstitive H2ase (HydA from Clostridium). More recently we have identified the presence of O2-tolerant H2ases in the genomes of some cyanobacteria. We are currently studying this family of enzyme in the unicellular cyanobacterium Cyanothece by answering the following questions:  What is the physiological function of this enzyme? Is it connected to nitrogen fixation? What is the molecular basis of its O2-tolerance and would be used for high yield O2-production? 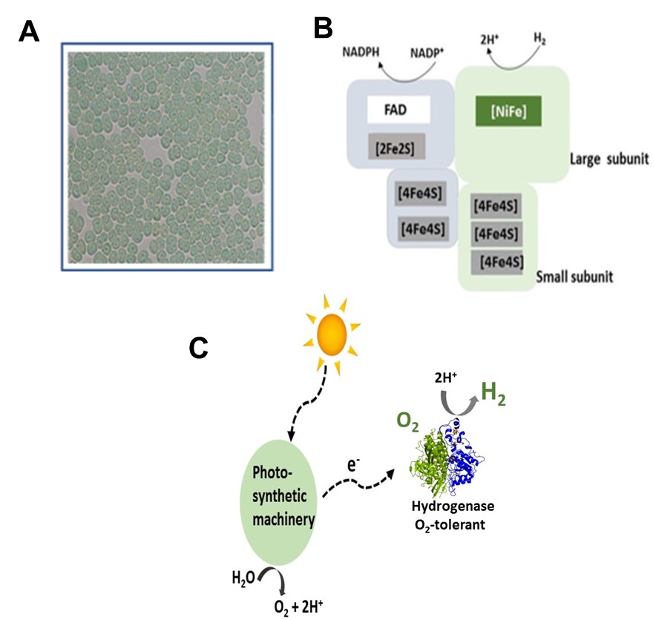