METABOLISM AND REGULATION OF CELLULAR PROCESSES IN BACILLUS SUBTILIS

Bacteria have to adapt constantly to survive to environmental changes. Depending on nutrient availability, the gram-positive model bacterium, Bacillus subtilis, developed an arsenal of physiological strategies such as adjusting its doubling time and its size to cope with a less favorable environment. When nutrients are lacking, B. subtilis is able to incorporate exogenous DNA or to differentiate in a metabolically dormant and environmentally resistant spore to wait for better conditions. In the lab, we are studying how B. subtilis adapts to the environmental signals. 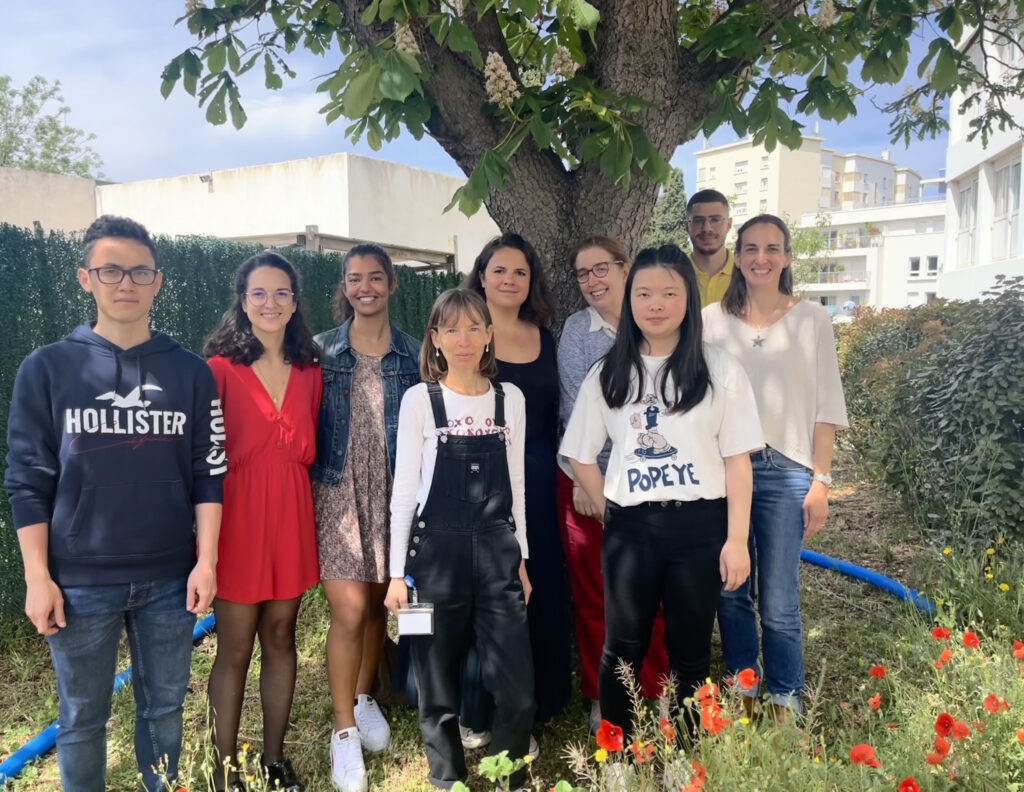 Frédeéique Pompéo presented at the “21st International Conference on Bacilli and Gram-Positive Bacteria” in Prague, Czech Republic (2022), the latest results obtained on the PrkA

The Galinier team was selected for “Derrière le blob, la recherche“, the participatory science experiment proposed by the CNRS. A blob is neither an animal,

Bacteria must have robust mechanisms to maintain their shape and their size and pass them to their progeny. One of the actors involved in this conservative process is the cell wall that provides bacterial physical integrity by balancing the high internal turgor pressure and maintains cell morphology. The main component of this cell wall is the peptidoglycan (PG), a polymer that is continuously remodeled during growth. PG precursors are synthesized in the cytoplasm and then exported across the cytoplasmic membrane, to be incorporated into pre-existing sacculus by the action of enzymes with either synthesizing or hydrolyzing activities. Major enzymes that catalyze PG synthesis are called penicillin-binding proteins (PBPs) because they bind the cell-wall antibiotic penicillin. Hence, therapeutic interests have fueled our extensive knowledge on these enzymes. However, while the biosynthetic pathway leading from intra-cellular sugar and amino acid intermediates to PG precursors is well understood, little is known about how cells control these enzymes. Our objective is to find and study regulators of these biosynthetic enzymes in particular in the Gram-positive bacteria B. subtilis where the PG layer is very thick. 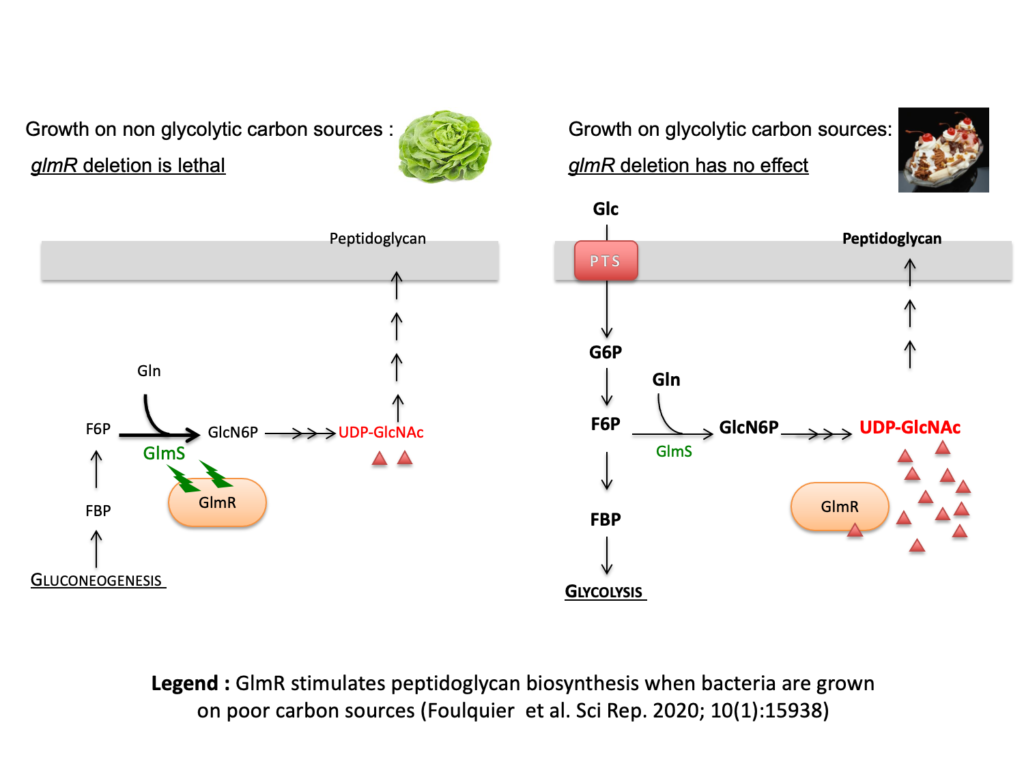 Protein phosphorylation is a post-translational modification that affects protein activity through the addition of a phosphate moiety from a molecule of ATP by protein kinases. It occurs in all life forms and is important for a wide range of cellular processes. Bacteria possess a diverse repertoire of protein kinase families. Beyond these kinase families, one of them is conserved in eukaryotes and bacteria. This is the Hanks kinases, that catalyze phosphorylation of proteins on serine and threonine residues in bacteria; they are also called Ser/Thr Protein Kinases (STPKs). In the team, we decipher the role of these STPKs and phosphorylation events in the regulation of B. subtilis cellular processes. 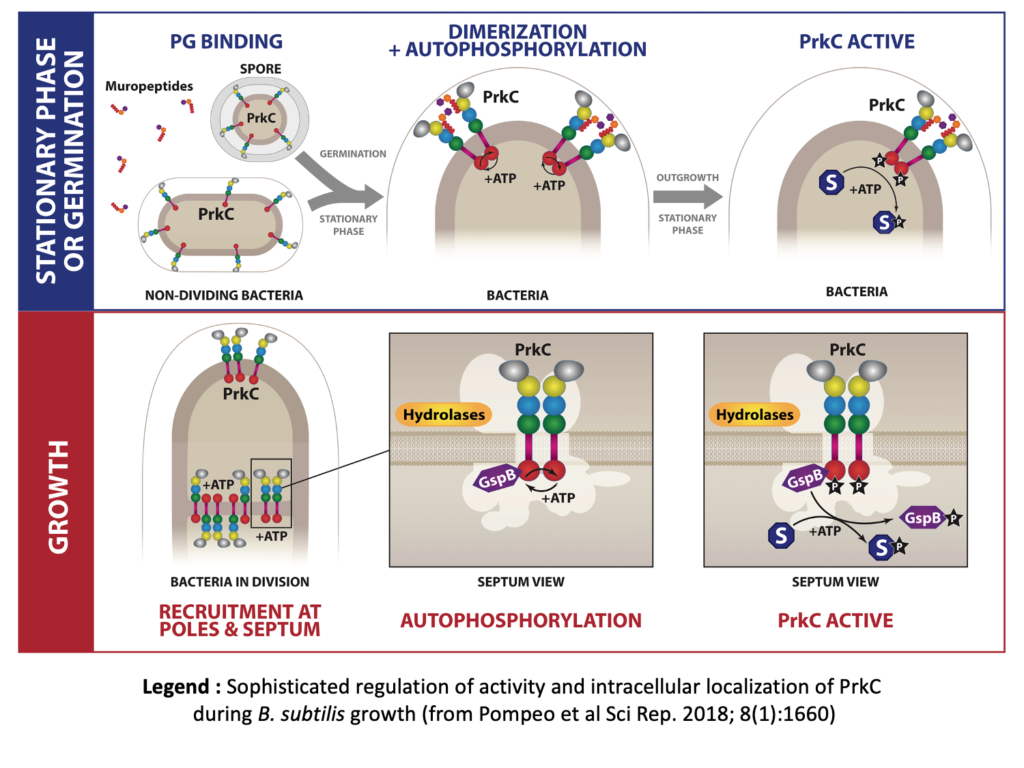 In response to starvation, B. subtilis is able to differentiate in a dormant spore able to survive in extreme environmental conditions. Characterizing strategies used to control division and cell shape through changing environments is one of the biggest challenges in microbiology. Small noncoding RNAs (sRNAs) have emerged as the main class of post-transcriptional regulators in bacteria. sRNA synthesis is tightly controlled; most of them are transcribed transiently usually in response to environmental variations and allows a fast adaptive response. sRNAs imperfectly base-pair to multiple target-mRNAs involved in most aspects of bacterial physiology and thereby regulate, their translation and/or stability via a multitude of mechanisms. In B. subtilis, the sRNA-based regulation network is surprisingly poorly characterized. Our project aims to bring to light the sRNA-based network in regulating cellular processes (growth rate, cell size or sporulation) depending on the nutriment availability in this bacteria chosen as a model of study. 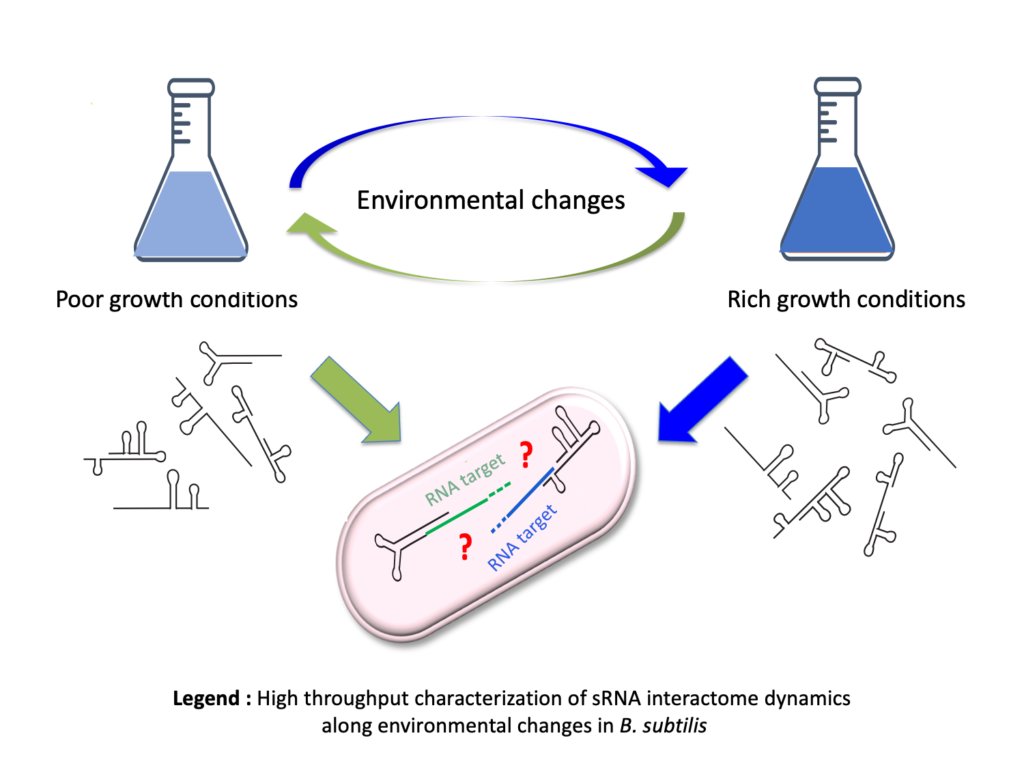